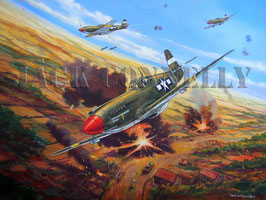 This painting is of a P-51A Mustang attack in-progress on an Axis installation early in the war. The early mustangs were used for ground attacks, and later as the models improved they developed into the long range escort fighters in the later war times. This is a finely detailed painting with alot of action and color. Ask about a painting of any aircraft that may be a favorite of yours.

Blast From the Past Gallery